As states impose restrictions on how to vote, we must evaluate this decision through the lens of God’s love.

As the body of Christ, we are called to be Thirst Quenchers. Our Great Redeemer provided an unforgettable example when he pronounced a blessing upon those who hunger and thirst for righteousness and set their expectation to be filled. While consuming food and drink is essential for our bodies, we must also nourish our souls.

Impactful churches excel at doing both and recognize the importance of caring for vulnerable members of society including the overlooked and underserved. They remember the orphan (youth), the widow (senior members of our community), the foreigner (immigrants), and the poor (the economically and socially disadvantaged). As the church protects and defends these community members, it must also give them voice.

The United States offers its citizens the opportunity to express their voices through the right to vote. While this privilege was once exclusive to one gender, race, and socio-economic status, it has now expanded to include most Americans.

However, while the right to vote exists across our United States, the ease of voting exponentially decreases in urban sectors where the underserved are prominent. Obstacles include an inadequate number of voting precincts and inoperable electronic voting machines. Such difficulties result in voter suppression.

In recent years, several churches in urban communities have proactively responded to these obstacles. Some of their buildings have become polling locations. Many of their clergy persons have served as polling chaplains. They have organized phone banks to encourage community members to vote. They have transported senior citizens to the polls. They have empowered local community members to express their voices through their votes.

However, it is not uncommon in urban environments that are occupied with people of color to find long lines on election day. To ease the pain of prolonged waiting, some community leaders distribute care kits to encourage voters. This may include personal protection equipment (PPE), food, and drink.

This compassionate community outreach is ministry. It encourages recipients to endure the waiting process. It provides nourishment to sustain voters in the interim. It communicates to the external community that they are valued. It also unveils God’s love. It helps us to remember that our Lord is not only concerned with our spiritual nourishment, but also our physical well-being.

In response to these acts of hospitality, Georgia Governor Brian Kemp, with the support of several elected leaders from his political party, signed a bill that modified the voting process. The new law requires IDs for absentee ballots, limits the number of available drop boxes, and makes it illegal to distribute water to voters who are waiting in line.

This law disproportionately affects members of underserved communities. Rather than implementing systems that simplify access to voting for all Georgians, this law can easily be interpreted as punitive towards inner-city voters. This decision can also be seen as a signal that the underserved doesn’t deserve equity, fairness, or to be heard.

Rather than question who’s right and who’s wrong, we must evaluate this decision through the lens of God’s love. As we look to Christ, we must remember that Jesus is committed to being a Thirst Quencher. He refreshes those who thirst after righteousness. He offers us living water. He makes available a spring that gushes up to eternal life. He eliminates our thirst as we abide in Him.

As representatives of Christ in the world, our hearts should flow with rivers of living water. We are equipped to refresh the parched, reclaim the perished, and restore those who need renewed hope. Sometimes we do this through the preached Gospel. Other times we accomplish this through a word of testimony. During election time, we may also accomplish this by offering a voter who has experienced a prolonged waiting time a bottle of water.

When we do so, they can experience the Thirst Quencher.

Learn more about what United Methodists believe about the right to vote and how to take action. 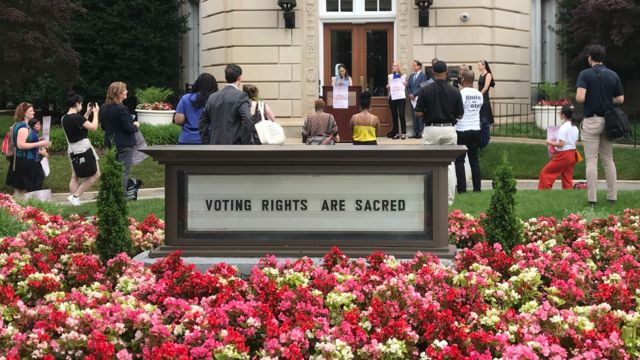