What you can do right now to end child detention

Across the United States, news headlines are laying bare the horrific and fatal conditions migrant children, families, and adults are facing in detention centers, at the border, and on their way to the border. Many families have fled violence and poverty in their countries of origin to seek asylum in the United States, only to have U.S. immigration officials tear them apart.

These policies are immoral and contrary to our Gospel mandate.

The United Methodist Church opposes “immigration policies that separate family members from each other or that include detention of families with children” (Social Principles, ¶162.H). For years, the Church has called on the government to eliminate “indefinite detention, [and the] incarceration of children” and to establish “an immigration system that is rooted in the inherent worth, dignity, value and human rights of migrants.” (Book of Resolutions, 3281)

Today, we call on you — United Methodists.

The United Methodist Church directs its local churches, congregations, and members to: “call the United States government to immediately cease all arrests, detainment, and deportations of undocumented immigrants, including children, solely based upon their immigration status until a fair and comprehensive immigration reform is passed.” (Book of Resolutions, 3281)

Church and Society, in partnership with other faith-based organizations and community groups, is calling for an immediate end to child detention and family separation. Join us. Help young people send letters and drawings to Congress and President Trump, and send your own.

Help young people send letters or drawings to Congress and the White House.

Have children and youth write letters to Congress and President Trump, urging these leaders to do everything they can to immediately end child detention, unite immigrant children with their families, and prevent other detention centers from opening.

Send your own letter to Congress and President Trump.

Let your members of Congress and President Trump know that you’re a United Methodist, a follower of Christ, and that separating and detaining children is bizarre, cruel and immoral. You can use our website to send an email right now to your representative and senators. 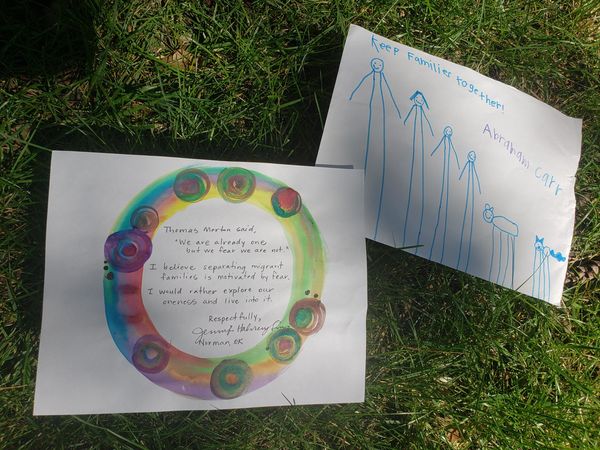