Our son David and the importance of Medicaid

A pastor and his wife reflect on the importance of Medicaid in their lives and the life of their son.

David who has Down syndrome, was delivered at 32 weeks due to problems with blood flow through the umbilical cord. March 28th marked the beginning of an unforgettably stressful journey - 92 days in the NICU, then six weeks at home followed by a trip to Atlanta for open-heart surgery at age four months.

David’s first two years of life were marked by multiple procedures, specialist appointments, therapies, and various other services. We were often discouraged and afraid, often uncertain about what the future would hold.

We worried about everything - David’s health (sometimes, his survival), his developmental future, whether my aging car was going to make it through all the back & forth to the NICU, our older son Simon and how to meet his needs while caring for his brother. One thing we didn’t have to worry too much about was medicals costs.

When I was pregnant, I had reasonably-priced insurance through my employer. Due to David’s diagnosis and premature birth, he qualified for Medicaid to supplement our insurance. My employer changed insurance programs before David’s heart surgery, and we had to meet a new deductible. I returned to work briefly after my maternity leave, and then a relative helped us care for David. We’d planned to use an in-home daycare center, but as winter (cold & flu season) approached, David’s compromised immune system led me to choose to leave my job to stay home with him full-time.

Our primary financial concern was making sure David (as well as the rest of the family) had health insurance, and I consulted a local broker. She told me we were lucky to be coming into the market under Obamacare, because prior to that, David would have been uninsurable. Point blank - he would have been rejected for coverage due to his diagnosis of Down syndrome: the very definition of a pre-existing condition. I remember this conversation clearly, and imagined the nightmare of trying to provide for his multiple needs with no coverage. Denied - before he’s even a year old.

Fast forward seven years - David is doing quite well. He only has to see his specialists periodically, and most of his health issues are “regular kid” issues - colds, ear infections, stomach flu.

We are fortunate to have coverage through my current employer, but during David’s short life we’ve had six different plans. If the protections for pre-existing conditions and lifetime benefit caps disappear, David’s medical future again becomes tied to my employment. If cuts to Medicaid occur as proposed (I’m a therapist who bills Medicaid and private insurance), I could lose that job and that coverage - and David wouldn’t be eligible for Medicaid. We know we’ll do whatever we have to do to make sure he gets what he needs. But we won’t be able to save for retirement or college for our other son, or a special needs trust for David after we die, or anything. 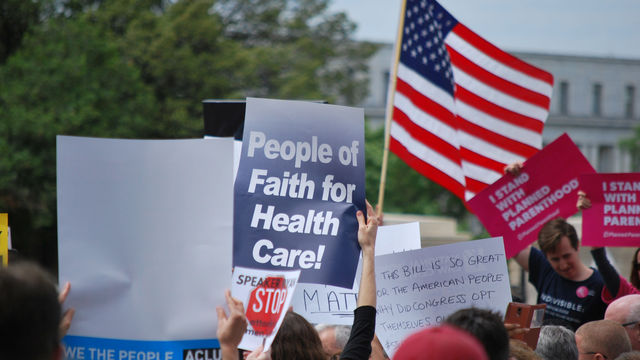