Dozens of people died last weekend in shootings across the country. Many lives might have been saved if the U.S. Senate passed universal background checks legislation.

Over 30 people were killed and dozens wounded in mass shootings this past weekend in El Paso, Texas, and Dayton, Ohio.

These occurred less than a week after a mass shooting in Gilroy, California, killed three people and injured over 10.

Scores of others were killed and wounded each day during this same time period in smaller, but no less deadly, incidents of gun violence across the U.S.

We lament this death, pray for all who have been affected, and urge you to join us in action.

We are calling on United Methodists in the United States to email their senators to pass the 2019 Background Check Expansion Act.

The bill was passed by the U.S. House in February. In order for it to become law, it needs to pass the Senate and be signed by the president. Sen. Mitch McConnell has a lot of power as majority leader to decide what bills will be considered by the Senate. And thus far, he has shown no interest in having this bipartisan, commonsense bill brought before the Senate.

Tell Congress inaction is not an option. Tell them to pass the Background Check Expansion Act.

Jesus deplores violence. And while all forms of violence are detestable, the presence of guns and weapons of war make violence deadlier — and more frequent.

The ease of access to these weapons — coupled with the emboldened white nationalist movement, toxic masculinity and much more — contributes to this ongoing epidemic of massacres.

In addition to that:

There is something extraordinarily wrong with this picture. Too much blood has been spilled. Too many lives have been ruined.

We know what it takes to decrease gun violence. What is lacking is the political will to make it happen.

Universal background checks are proven to prevent gun violence, and are a policy supported by 90% of Americans, across the political spectrum.

Nearly everyone agrees that background checks help keep guns out of the wrong hands. The United Methodist Church even calls upon congregations to advocate for them.

Jesus calls each of us to be peacemakers.

Act for peace by advocating. And speak out — preach — against hate and white supremacy. These have motivated high profile mass shootings targeting Latinx and migrant communities in Texas, a synagogue in Pittsburg, a black church in South Carolina, a Sikh gurdwara in Wisconsin, and more.

Join us — advocate and live love in action. 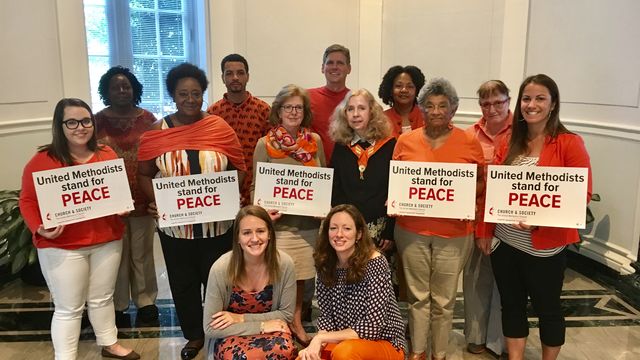