Migration stories from the bus station

Katie Myers put her faith into action, volunteering with the Interfaith Welcome Coalition in Texas. The people she’s met have changed her life.

It started with a sandwich.

After years of watching paralyzed from the sidelines as a migrant crisis unfolded in my backyard, in August 2018, the Interfaith Welcome Coalition asked for volunteers to make lunches for migrant families at the bus station in San Antonio, Texas. Finally, this was something I knew how to do.

Soon I wondered about becoming more involved in the coalition’s humanitarian work, and in February 2019, I became a weekly volunteer at the bus station. It has changed my life, it changed me.

In the past six months, tens of thousands of families have passed through my city from all over the globe. I’ve met people from Honduras, Guatemala, Mexico, El Salvador, Nicaragua, Ecuador, Venezuela, Cuba, Haiti, Cameroon, Angola, Congo, Eritrea, Bangladesh, Russia, Romania and the Republic of Georgia.

Instead of nameless, faceless people in a political debate, now I see their faces, their humanity, their hope, their need and their suffering. Like:

One day someone brought some Spanish New Testaments to the station. I saw one boy, who was about 10, studiously poring over his copy. I asked him if he was looking for his favorite part. He said yes, he was, and pointed to the page that was open to Psalm 91.

You who live in the shelter of the Most High, who abide in the shadow of the Almighty, will say to the Lord, “My refuge and my fortress; my God, in whom I trust.” For he will deliver you from the snare of the fowler and from the deadly pestilence; he will cover you with his pinions, and under his wings you will find refuge; his faithfulness is a shield and buckler. You will not fear the terror of the night, or the arrow that flies by day, or the pestilence that stalks in darkness, or the destruction that wastes at noonday. (Psalm 91:1-6)

The favorite psalm — the heartfelt prayer — of a little boy seeking safety and refuge in our country speaks of the assurance of God’s protection under outstretched wings for those seeking refuge from pestilence and violence and terror. Will he find that refuge among us?

I see their faces too in the stories of families forced to wait in Mexico under the “Migrant Protection Protocols” or those blocked from applying for asylum because they did not apply first in the countries they traveled through.

These are the stories of the faces I see now — the people who have changed me. I keep sharing their stories with friends and strangers so we can all see them as our siblings, our neighbors and the reflection of Christ in our midst.

I now know, it is in loving and honoring the stories of sojourners that we recognize ourselves and our own story.

You shall also love the stranger, for you were strangers in the land of Egypt. (Deuteronomy 10:19)

Katie Myers lives in San Antonio, Texas, with her husband and two teenaged children. A lifelong United Methodist, she is the lay leader at Laurel Heights United Methodist Church in San Antonio and spends much of her time teaching, writing and speaking about the life of faith. A librarian by training who now does freelance work, she is also a regular volunteer with the Interfaith Welcome Coalition. 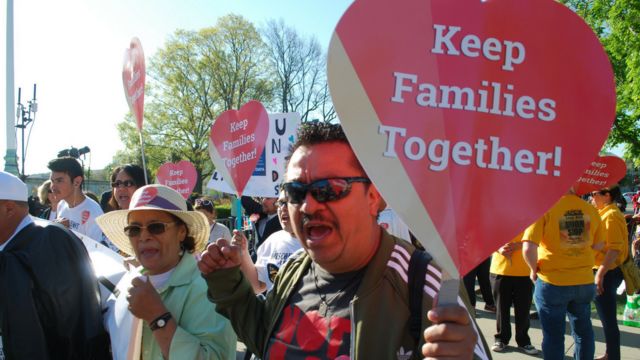 Act Now Support the Dream & Promise Act of 2019 for Immigrant Dreamers, TPS holders, and DED recipients in the U.S.!